Burrowing is an important feature in the life of a solifuge and this behavior has been studied in detail for several species (Muma 1966c, Cloudsley-Thompson 1977, Gore and Cushing 1980, Wharton 1987, Punzo 1998). Burrows provide humidity and protection from extreme temperatures and predators on a daily basis. Burrows (including cavities under rocks or other shelters) serve as a daytime refuge for nocturnal species, as a protective retreat during molting and digestion of large meals, and for deposition of eggs. Egg deposition has been observed for several species including Solpuga caffra (Lawrence, 1949), Galeodes granti (Cloudsley-Thompson 1967), and Metasolpuga picta (Wharton, 1987). Egg deposition and incubation by Eremobates durangonus was observed over a two-year period by Muma (1966b). Several other species were observed to have laid eggs, but E. durangonus was the most successful under laboratory conditions. Eggs of this species were laid in masses of 20-164 eggs 11.3 days after mating. Muma (1966b) noted that at least some species were capable of laying more than one batch of eggs, at least under caged conditions. Other species, however, do not (Punzo 1998). Females of some species are known to remain with the eggs until hatching, though this does not appear to be true for all. The limited information available suggests that males die shortly after mating and females do not live much longer (Muma 1966a, Wharton 1987, Punzo 1998). It must be emphasized, however, that very few species have been examined in this regard, and for most of the solifuge families, no such information is available.


Incubation varies considerably (from 2 days to 2 months), and Punzo (1995) provided experimental evidence for the effects of temperature and humidity on developmental time. Lawrence (1947) observed the eggs and first instars of Solpuga hostilis, and found them markedly different from Roewer’s (1934) interpretations of newly hatched Galeodes. The biggest difference was the presence of thick, long setae of the larvae of Solpuga. Punzo (1998) noted that eremobatid hatchlings are somewhat intermediate in extent of setal development. Lawrence hypothesized the setae to function as an aid in egg hatching, and suspected that setae would be shed after the first molt. Newly hatched solifuges have been called larvae or post-embryos, and the few species that have been illustrated (Croneberg 1887, Lawrence 1947, 1963, Cloudsley-Thompson 1961a, 1967, Junqua 1966, Thaler 1982) vary considerably in appearance. Post-embryos have poorly developed appendages and though capable of some movement, are essentially immobile until the molt to the first nymphal instar, which usually takes place in a few days (Muma 1966a). First instar nymphs much more closely resemble adults, and at least in some species, these are gregarious and remain together in the birth chamber (Muma 1966a). Dispersal occurs following molt to the second nymphal instar (Muma 1966a, Punzo 1998). Muma (1966a) and Punzo (1998) record eight nymphal instars in two different eremobatid species, and Wharton (1987) provided evidence for the existence of at least 4-5 nymphal instars in M. picta of the family Solpugidae. The limited evidence available suggests that solifuges do not live more than one year. Metasolpuga picta from the Namib Desert is bivoltine (Wharton 1987) but other species studied appear to be univoltine (Muma 1966a, Punzo 1998; for possible exception, see Junqua 1966). 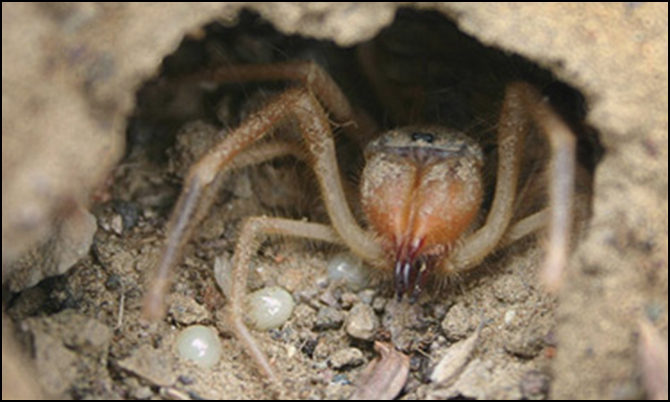