The fossil record of camel spiders is very poor. The ca. 330 million year old Schneidarachne saganii from Kamienna Góra in Poland (Mississipian, Viséan) is an enigmatic fossil arachnid which seems to show some solpugid-like features, such as large, forward-projecting chelicerae (Dunlop & Rössler, 2003). The oldest unquestionable camel spider is the ca. 305 million year old Prosolpuga carbonaria from the world-famous Mazon Creek locality in Illinois, USA (Pennsylvanian, Westphalian D) (Petrunkevitch,1913). Even this is not particularly well preserved, but can be recognized as a camel spider from its outline. Its incompleteness means it cannot easily be assigned to, or compared with, any living family of Solifugae. What is interesting is its original habitat. While living camel spiders are predominantly associated with arid habitats or even deserts, the Coal Measures from which Prosolpuga originates are interpreted as a rather swampy forest environment.

The next oldest fossils come from the ca. 115 million year old Crato Formation in north-eastern Brazil (Cretaceous: Aptian) (Selden & Shear, 1996; Dunlop & Martill, 2004). Cratosolpuga wunderlichi is now known from a number of extremely well-preserved specimens which include details of setae, claws and even the male flagellum. Based on these features it can be assigned with some confidence to the modern family Ceromidae. This is particularly significant since ceromids are restricted today to southern Africa. What it shows, in terms of biogeography, is that ceromids must have been present on the ancient continent of Gondwana at about the time of its break-up during the Mesozoic, and that while they survived in the part that became Africa they died out in the part which became South America.

Baltic amber - which is thought to be around 40-50 million years old (Paleogene: Eocene) - has produced a single, well-preserved fossil, Palaeoblossia groehni, shown below (Dunlop, Wunderlich & Poinar, 2004). This rather small (only 5 mm long) possibly adult male example is assigned to Daesiidae, but cannot be placed in any of the existing subfamilies. It shows that daesiids - and Solifugae in general - were at this time present in northern Europe, well beyond their modern range. The Baltic amber forest is thought to have been warmer than today, but again the presence of a camel spider was a little surprising as it was not thought to have been a particularly arid habitat. The youngest fossil example is Happlodontus proteus from Dominican Republic amber (Poinar & Santiago-Blay, 1989). The exact age of this amber is in dispute, but dates of 10-30 million years (typically Neogene: Miocene) have been suggested. Preserving details of the legs and cheliceral dentition, this fossil has been assigned to Ammotrechidae. It fits neatly with the present day American distribution of the family, which includes the Caribbean Islands. 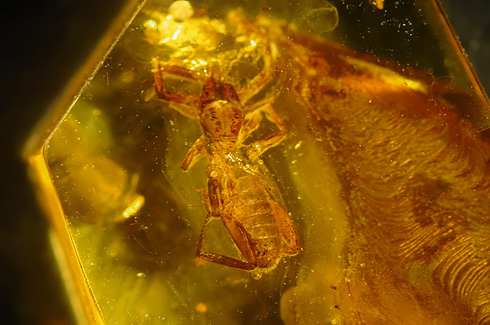