Most solifuges are agile, cursorial predators capable of covering considerable distances in search of food. They have frequently been recorded foraging on open ground in sparsely vegetated arid regions, but are quite capable of climbing vegetation in grasslands and scrublands. Rapid, seemingly random, locomotory activity is generally considered to be the normal searching strategy (Muma 1966, Wharton 1987, Punzo 1998), though there are obvious exceptions for certain termitophilous species (Lawrence 1963, Muma 1966). Several observations suggest that some species at least occasionally stalk their prey (Cloudsley-Thompson 1977) and the short-legged mole solifuges of the family Hexisopodidae from western southern Africa, though occasionally found on the surface, probably forage beneath the surface of their sandy substrate. Some of the earliest observations (e. g. Pocock 1897) suggest that tactile stimuli are important in prey location and capture. More recent studies have verified the importance of tactile stimuli (Bolwig 1952, Muma 1966) and visual stimuli (Muma 1966). There is also some suggestion that they can detect substrate-borne vibrations (Wharton 1987). Extensive work has been done on the structure of the malleoli, the unique rachet organs on the legs of solifuges. While the function is still not entirely clear, they are believed to have chemosensory properties (Brownell and Farley, 1974), and may therefore be used in prey detection. Punzo (1998) provides a good summary of previous work on Hunting Behavior. 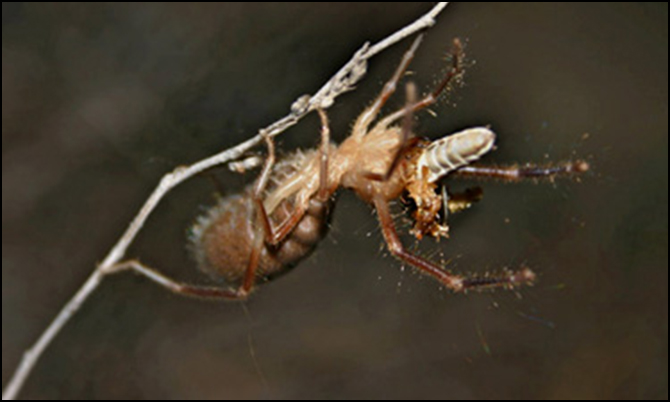 From R. Ryan Jones, Denver Museum of Nature and Science:


Like many aspects of solifuge biology, little is known about their method of prey localization. Observations of solifuge hunting behavior is described to include ambushes, chases, stalking, and seemingly random events following an erratic circular or zig-zag search pattern (Wharton 1986; Muma 1966). As opportunistic predators, solifuges are believed to utilize a combination of visual, chemical, and tactile sensory cues in prey detection, however the methods and sensory organs involved in this process are unknown (Bolwig 1952; Cloudsley‐Thompson 1961; Hingston 1925; Muma 1966; Turner 1916). A comparative morphology analysis using transmission electron microscopy and electrophysiological recordings of setal papillae on the pedipalps found structures consistent with both mechano- and chemoreception (Conrad & Cushing 2011; Cushing et al. 2014). Malleolar organs, fan-like structures that are found on the ventral side of the fourth pair of legs, are morphologically consistent with chemoreception (Brownell & Farley 1974; Yiğit et al. 2012), and may also have some tactile sensory function as well (Yiğit et al. 2012), both likely involved in prey detection.

Observations on the old-world species Solpugyla globicornus Kraepelin concluded that prey detection was based on tactile stimuli to the legs and pedipalps; contact of these appendages with another organism resulted in consumption or retreat (Bolwig 1952). Solifuges show no interest in dead prey material unless it is manipulated to appear to be moving, suggesting that vibrational or chemoreceptive senses may be more important in prey detection (Hingston 1925; Turner 1916). However, more recent efforts in husbandry have reported consumption of both live and dead whole crickets as well as cricket parts (Rowsell 2014). Eremorhax magnus Hancock, Eremorhax titania Muma, and Ammotrechula peninsulana Banks have also been documented to orient to and stalk prey several centimeters away (Muma 1966). Juvenile solifuges have been observed to detect prey buried within the substrate, demonstrated by an abrupt stop, retreat, and quick excavation of a prey item after an otherwise erratic search pattern (Conrad & Cushing 2011).