In areas where they occur, some species of solifuges can be found underneath rocks and other surface debris (including cattle dung or other large herbivore dung). Others, particularly in tropical regions, may be found on occasion under bark or within logs. A greater variety of solifuges (including psammophiles and others which don't typically shelter under rocks) can often be found foraging around bright lights at night, especially where there is conspicuous and abundant insect activity. Lights at roadside rest stops, those on commercial buildings, and even porch lights can be productive. Mercury vapor lights, powered by a portable generator and placed to illuminate a suspended white sheet (as in the photo below), can be employed where permanent light sources are not present. The solifuges often linger near the margins of the illuminated area, opportunistically grabbing prey items. 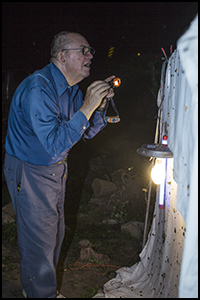 For more extensive surveys of solifuge faunas, particularly where seasonal activity data is sought, pitfall traps are effective (Muma 1975; Muma 1980).  It should be noted, however, that pitfall traps intended for invertebrates can pose a significant risk to small vertebrates, such as lizards, frogs and small mammals.  Design of pitfall trap arrays should take this into account.  The use of "dry" traps (those without preservatives), reduces the risk to vertebrates (as long as they are constantly monitored), but may reduce the capture of solifguges, as they can climb up the sides of the traps and escape.  The use of preservatives (such as propylene glycol or a propylene glycol/ethanol mix) greatly improves the yield of solifuges and other invertebrates, but can increase the death rate among vertebrates not excluded from the traps. 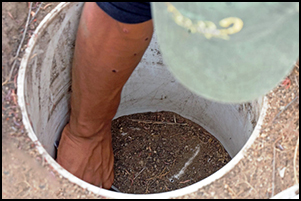 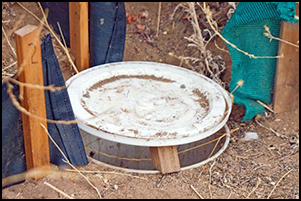 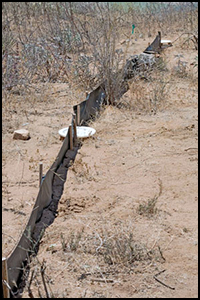 For short-term sampling efforts, such as weekend field trips or vists to multiple localities on a prolonged trip, plastic cups may be employed as pitfall traps. As solifuges are adept climbers, such small pitfall traps have limited value in collecting live material, unless modified for that purpose. They do work well, however for capturing material taxonomic studies if a proper preservative, such as propylene glycol or a propylene glycol/ethanol mix is employed. 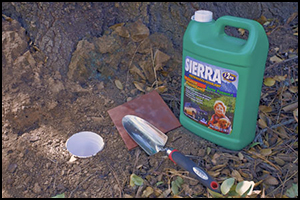 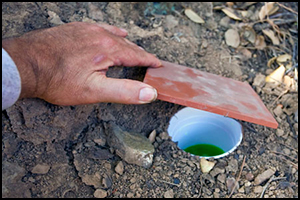 A modified pitfall trap for live capture of solifuges can be constructed from a plastic cup and a clear, dome-shaped lid such as the one that accompanies "slushie"-type drinks in the United States.  The dome-shaped lid, which has a central hole through which a straw is normally inserted, can be inverted and glued to the rim of the cup.  A solifuge entering the trap through the hole, which now sits at the bottom of the inverted dome, is blocked from escaping when it climbs the side of the cup, as the inverted lid forms a barrier.

From Dr. Paula Cushing, Denver Museum of Nature and Science:

Camel spiders (soifuges) are a notoriously difficult group of arachnids to collect and study. The majority of species are nocturnal, very fast moving predators. The two most effective methods for attracting and collecting solifuges are light attraction techniques and pitfall trap sampling.

Establishing pitfall trap arrays is an effective method for collecting solifuges over an extended period of time. A modified pitfall trap array using drift fences was used for solifuges by Xavier & Suesdek Rocha (2001; Fig. 1). This type of pitfall trap array incorporating drift fences traces its origin to the field of herpetology (Gibbons & Semlitsch 1981; Bury & Corn 1987; Corn 1994). Solifuges as well as many other types of soil dwelling arthropods are collected in this manner. The drift fences can be made of any material including plastic landscape fencing, stiff weather-resistant fabric, metal flashing, etc. They need not be particularly high (12-13 cm wide is sufficient). A Y-shaped array of fencing can be used effectively for trapping solifuges over a 2 – 4 week period (any longer and the preservative will either evaporate or degrade). It is best to use pitfall cups with 10 – 15 cm diameter to accommodate larger species. Tupperware containers work quite well. These pitfalls should be 1/3 to ½ filled with preservative. The best preservative to use is propylene glycol (RV antifreeze). It both preserves the tissue well and is non-toxic to vertebrates. The cups should be covered with some sort of lid to keep rain from diluting the preservative. The lids should be wider than the diameter of the cup and should be suspended about 2 cm above the surface. If using a Y-shaped array, place a pitfall cup where the three arms converge; place cups at the ends of each of the three arms; and place two cups on either side of the center of each arm of the drift fences (Fig. 1, below).

Cushing & González-Santillán (2018) developed a modified pitfall trap system using suspended lights. In this pitfall trap system, drift fences and pitfall cups are still utilized but lamps (the brighter the better) are suspended over the array. In recent fieldwork, we found that it is also beneficial to set additional pitfalls somewhat away from the drift fences since solifuges, as they rush toward the light stimulus, sometimes move directly away from the drift fence rather than following along it. See Fig. 2 (below) for an example of this illuminated pitfall array. This type of collecting system is typically set up before nightfall and organisms are collected the next morning. Since this is a short-term collecting method, there is no need to cover the cups. The shortfall of this method versus the long-term arrays is that you will only collect those species active at that period of time. Thus, you should schedule collecting trips at different time periods to capture all the species that may be found in the habitat. This illuminated trap system results in less bycatch and requires less preservative. Graham et al. (2019) unequivocally demonstrated that illuminated pitfall arrays were far more effective at trapping solifuges than passive long-term (un-illuminated) arrays.

It has long been known that solifuges are attracted to lights at night where they hunt insects that are also attracted to light (see citations in Cushing & González-Santillán 2018). However, the physiological and evolutionary explanation for this attraction has not been determined. Some of the most effective sites to look for solifuges are desert habitats with permanent or semi-permanent lights. Many State Parks, National Parks, and other natural areas often have illuminated bathrooms, entry stations, or other structures. In habitats where solifuges are found, they can frequently be found around the pools of light near these structures.